That Time We Went to Switzerland - Day 1

After dancing New Years away on rooftops and saying goodbye to all the amazing people on the Italian wedding trip of a lifetime, it was time for the second half of this adventure. Switzerland.

We said goodbye to our Mandurian home at 5:30 a.m. to drive back up to Rome. We thought we had more than enough time to make a few drone stops, get some final Italian espresso, maybe take a dip in the ocean and hang out for our first train. Turns out we had just enough time to come in hot, running to our first train only to find out we needed another train to get to our first train. Which meant we were no longer “on time,” but missed our first, second, and possibly third trains.

So we stood in a sea of Italians with about 350 pounds of gear wondering “What now?” It is probably important to note that neither my brother, Joey, nor I have EVER taken train transportation in our entire lives, and our handy world traveler, Jessie, was about to leave us to head back to the states. She did everything she could do in that moment. She got us a ticket on the next commuter train, hugged us goodbye, and wished us good luck. We were officially on our own.

On our train to our "first" train, we strategized. Turns out trains tend to run late, and our next one was notorious for doing so. So for the first time in our lives, we made a plan. 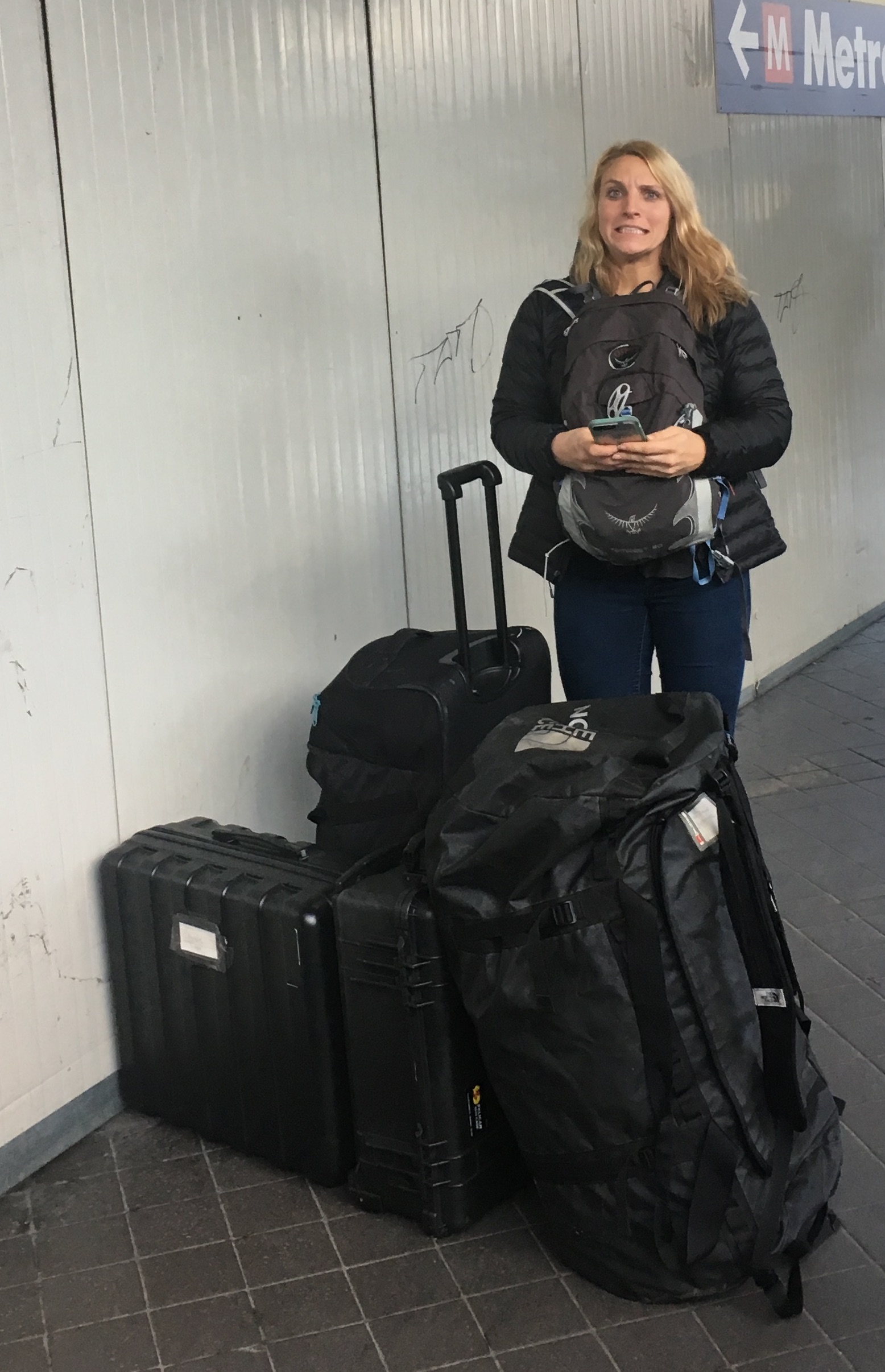 We found out early on that we had to stand up before everyone else to load up our bodies with all of our ski and camera gear. Once the doors opened, we quickly figured out how to find out where our next train was and ran as fast as our clunky selves could to the new terminal. Which was empty. Plan B.

At this point it is around 2:45pm and we literally hadn’t eaten a thing all day and we were really starting to feel it. We weren't hangry, but we weren't sharp. Plan B ended up being me waiting inside the gates with all our stuff while Joey figured it out. I too, tried to figure out this whole train thing while I stood guard. There were people constantly running around me, so I guess we somewhat fit in and that felt a little comforting.

Joey came back with some much-needed pizza and new tickets in hand. Our new plan was to take the next train, know what our backup train at the next stop was, and once again, figure it out at the next station. Joey and I are both REALLY good at going with the flow and making decisions on the fly so while it sucked, we called it an adventure and moved on.

We stood in a sea of Italians with about 350 pounds of gear wondering “What now?”

The next station went pretty much the same as the first -- running to our original train in the hopes it was running 30 minutes late, finding out it had once again left without us, and making a new plan. This stop was a little more intense since our options were dwindling as it became later in the night. We didn’t want 'sleeping on the rail station floor' to be part of the new plan, so we ran to the top of a remarkably large set of stairs, stopped halfway down, and I again took guard of this enormous pile of luggage.

Joey ran to the ticket booth, only to find an unforgiving line of people. Too long for plan B, so plan C began. He tried to navigate the Italian kiosk with “help me” written all over his face. Luckily, someone saw, came over gesturing to help with hopes of getting a desperate American payout. The Italian looked at the kiosk, did some magic, then looked confusingly at Joey. “Holy shit, you’ve got to go! Follow me!!”

I saw Joey and an Italian man now plowing their way back through the crowd up the hundreds of stairs toward me where I remained half way. So I started to load back up like a camel, trying to gain some kind of momentum as we all barrelled our way back up the rest of the stairs. We raced through the halls, and I am positive I knocked into everyone as I tried to keep up. This, however, was no time for manners. Just like we were in a movie, the Italian man pointed at a gate and yelled “RUN!!” Joey quite literally threw him $40 USD, the man laughed and questioned, “American?” Joey yelled back, “It’s all I got!” as we ran as fast we could through the gate and onto our first class carriage, the doors shutting right behind us as the train began to creep down the tracks. I was shaking with adrenaline and the train was boiling hot, probably a comfortable temperature for anyone not running their hearts out. We plopped down in our spacious upgraded first class seats, sweating, panting, and gaining the attention of everyone around us. For anyone who didn't notice us then, they definitely did when our waiter came over for a meal order and I asked for a burger. I quickly became the American laughing stock of our carriage, but I didn’t care because we were finally on our way to our last train in Switzerland that had a large enough layover that we could make.

On our second to last train, we stopped at a section where people had to claim their items for customs. I noticed a man get off, but didn’t think much of it until the train started moving and I noticed he hadn’t gotten back on. I looked back at his family who didn’t seem distressed so I figured they were in some sort of communication. Moments later his panicked wife ran up to us asking if we had seen him. “No,” I responded, concerned as she stood there with his passport and phone in her hand, and a baby in her arms. Just going through our own hardship, we tried to comfort the woman until her husband came bouncing through the doors about ten minutes later from another carriage. We laughed in relief but wondered… what would we have done, and what else is going to be thrown our way?

I think going through all of this made getting into Switzerland extra sweet. It was instantly different from Italy. It was quiet, and already dumping snow. It also costed 2 Euros to use the bathrooms... something Joey, who was having a #2 emergency, did not appreciate. We boarded our last train, and instantly made friends with the conductor. He seemed to take a liking to us, so he insisted we go to first class with him, and we all reminisced about our travel adventures. He was a true world traveler, one that didn't have to worry about (in his words) a "family government" AKA, a wifey. He just came back from a 50 day trip across Africa... On a bicycle.

He showed us the engine room, introduced us to the engineer driving the train, explained in the ins and outs of Zermatt including the terrible risk of avalanches this year. He gave us his number and email to meet up for fondue. We never saw him again, but his spirit was immediately inspiring. 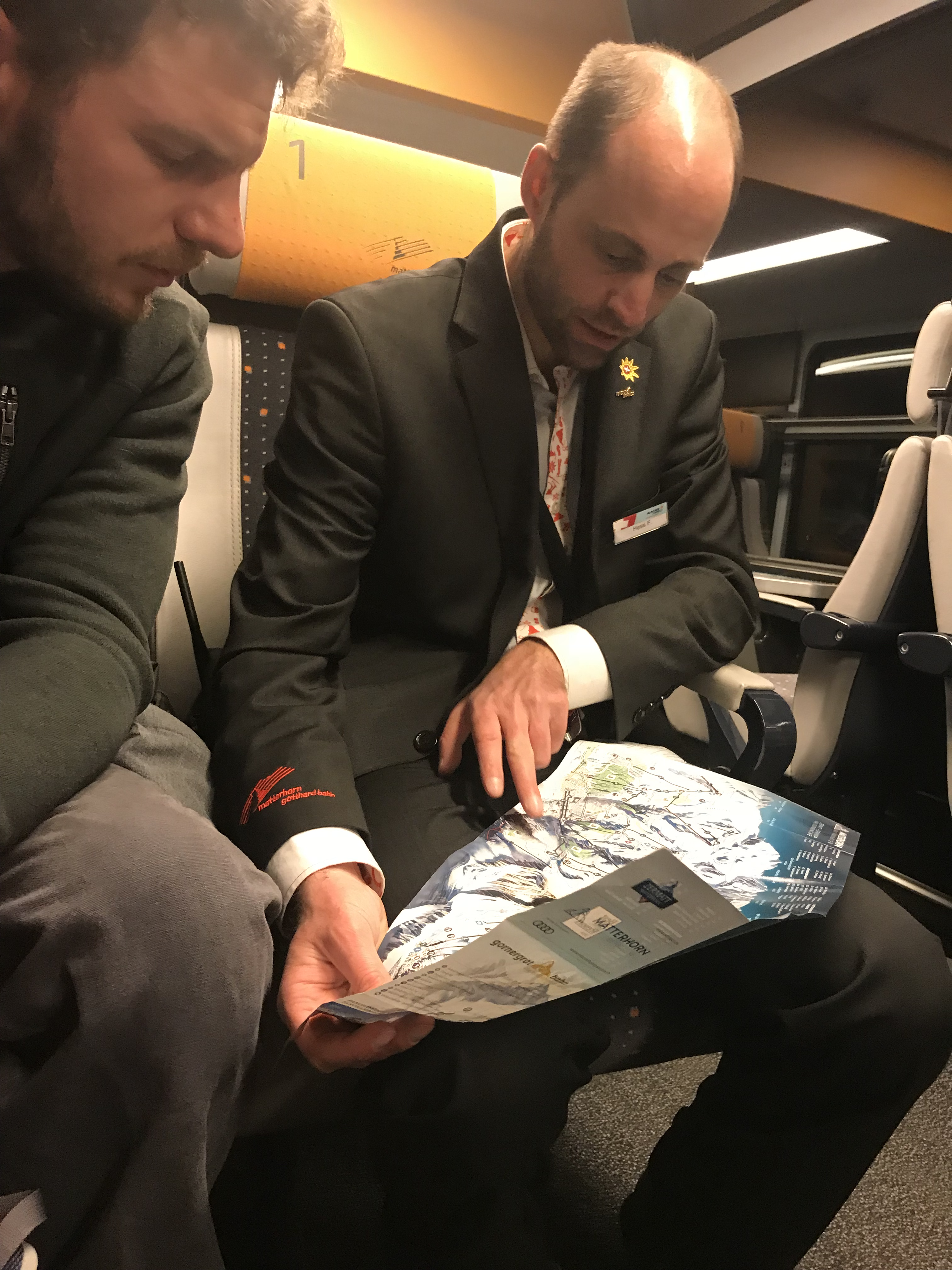 By the time we got into Zermatt it was around 12:30 in the morning, and it was like nothing either of us had ever seen. It was surprisingly lively for the time of day, and we can only compare it to the scene in “The Santa Claus” where Charlie and his dad walk through the North Pole for the first time. There are no cars allowed in Zermatt, only horse-drawn carriages and electric taxis, so we were immediately greeted with a village of people walking everywhere and pulling children on toboggans as about four inches of snow dumped down on us every hour.

My phone had died at this point, and Joey’s was coming close. We began our mile-long trek to our apartment, too stubborn to pay $25 for an electric taxi. We passed kids shooting each other with roman candles, and everyone being as happy as people could be. Since we were still carrying 350 pounds of gear, we had to take frequent stops, and got slightly lost at one section. We kept walking back and forth past our “road” which we later found was practically a vertical hike up covered in snow. This may not sound like a big deal, but with that much gear, that late at night with that much snow dumping down (more than we've ever seen in our entire lives), with almost no phone power, after 891 miles and almost 20 hours of continuous travel trying to find a road that was located in the middle of a decent sized hill... we were spent.

A taxi driver pulled up next to us and offered us a ride which we politely declined, but he asked us where we were going anyway (at this point we started to get some significant snow accumulation on us). Joey reluctantly pulled out his dying phone to show the man who responded, “Ohhh no no no, so far, I take you.” We figured it wasn't the worst thing in the world since we were already late to meet our tenants, so we went for it. The taxi couldn’t make it all the way to where we had to go, so he dropped us as close as he could and we hiked about a quarter mile through a couple feet of freshies, trying to figure out which building was ours, searching with only the light of our headlamps. After about 20 minutes of searching around Swiss huts with stone roofs, we finally found our apartment. Our older yet wildly in-shape Swiss tenants welcomed us with open arms. We must have looked decently odd as we approached in our Sherpa-like appearance -- our bodies loaded in gear, covered in snow, with headlamps guiding our way. They brushed all the snow off us with brooms and insited we shed a wet layer before coming in. We profusely thanked them, then passed out in the safety of our new home.